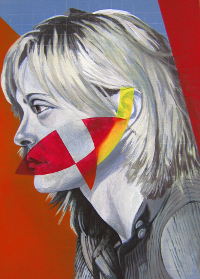 Biographical Introduction She was born in 1977, she lives and works between Rome and Los Angeles. She followed an artistic education since she was in high school, she attended the “Liceo” specializing in art subjects at the Alberto Savinio High School in Rome. In 1997 she entered the Academy of Fine Arts in Rome, in the chair of Decoration held by Professor and Maestro Gino Marotta. During her academic training, she attended an internship at the Ethnographical Prehistoric Museum Luigi Pigorini in Rome. She studied in detail the various techniques of reproduction of the iconographical designs which are found on museum findings, such as the dies for fabrics from Russian Asia and the Pueblo vases. Furthermore, she collaborated in the designing and preparation of several events held inside the halls of the Museum. She obtained her first class degree at the Academy, presenting a thesis on Crivelli and the town object, structured on a parallel between the votive town models brought by the Saints paintings depicted by the fifteenth century artist, and the subjects painted by her; evocative of a more light-hearted dimension, in which the object meaning in art, is analyzed throughout the historical eras up until the age we live in. She integrated her skills in the decorative sphere by attending a course in decorative painting at the Academy of the Superfluous; and collaborating with various decorators in Rome. Between 2001 an 2003, she participated in several artistic groups together with her group of artists she was part, with the supervision of the Maestro Gino Marotta; collaborating various times with the Cà d’Oro Gallery of Gloria Porcella. During this period she won the first prize with a group art work, in a painting competition called by the Town Hall of Fondi. The main art work is permanently on exhibition at the Castello Baronale. In 2004, she moves to Dublin where she collaborates with local theatrical companies, where she created stage sets in which one of them was designed for Siamsa Tire in Tralee. When she returned to Rome, she attended a deepening course in cinematographic and set designing techniques, at the School of Art and Performance in Rome. In the following years she participated in various artistic group exhibitions held in many Italian cities, among which an exhibition in Venice integrated in the most vast event of the Biennale 2007. From 2007 to 2010 she has worked with Domenico Bianchi, renowned artist, continuing her artistic production which one can see, among the others, in a temporary exhibition held at the Mastroianni Museum of Rome. In 2011, she had set two solo exhibitions between Rome and Bologna. In 2012 took part to the Marzia Migliora’s performance, which had set in Maxxi Museum of Roma. In 2013 she took part of a workshop in Sacred Art promoted by “Museo dello Splendore” in Teramo (Italy), which ended in a group exhibition held in its rooms. The artworks are part of the Museum collection. In 2014 she got a degree in Conservation Thecnician at Engim Veneto, Vicenza, after which she moved to Los Angeles and started to collaborate with Peter Shelton, a well known Artist. Currently she lives in Los Angeles.