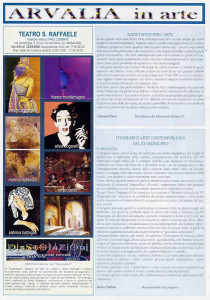 Arvalia in Arte 2008
Arvalia in arte and Mitreo Iside, with the support of the XV Town Council of Rome, promote a cultural event to set off young artists, integrated in a context to re-qualify the urban suburbs. The programme of exhibitions and meetings are held in various parts of the suburbs of the XV Municipality of Rome during the year 2008. The group artwork will be exhibited in the halls of the S. Raffaele theatre during the calendar of theatrical performances.